From figurative to abstract 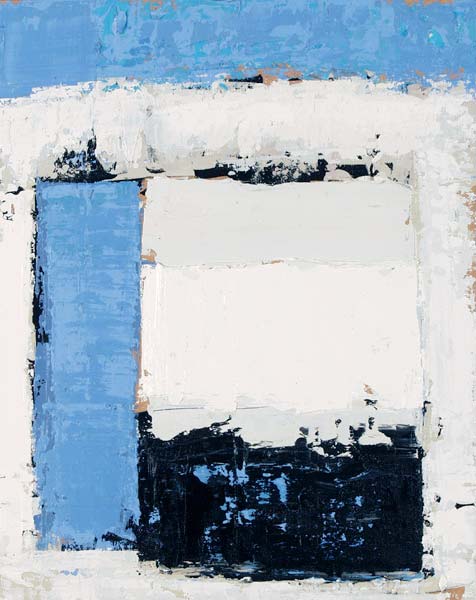 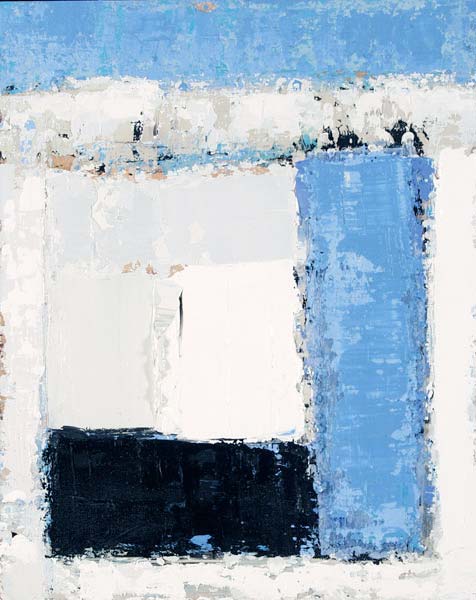 How the abstract series titled Composition Black, White and Blue, I, II, III, IV, 2002 evolved from a figurative beach scene from 1983.

Because you are not familiar with the context from which these abstract panels originate, you probably wouldn’t guess that it all started with beach-huts. There is no hint of anything you can recognize. And the title doesn’t help. Using the pictures below, I will take you step-by-step back to the source of inspiration for these paintings, and also show you how I create ideas for some of my abstract paintings. In this case, I zoomed in on a detail in the painting Beach XX, 2002 (see two pictures on the right)

The detail of the painting Beach XX, 2002, that led to the Composition Black, White and Blue, 2002

Forms, colors and the light from this beach scene have been transformed into an abstract series. This was done by moving selected forms around, and varying them in size and color tone in order to find a balance that evolved into a series of four paintings. The series can be seen as a whole, but each panel can also be displayed as a stand-alone. As the title suggests, it can be compared to a musical composition, where the composer also works with components, tone color, contrasts, loud, or soft, rhythm, balance, etc. to create a melody, to evoke emotions.

The silver white light you find in Beach XX, 2002 – the so called “Dutch Light” – is unique to the Dutch coastal areas and the lake and river districts. It comes from the sunlight being filtered by the clouds and reflected off the water. This characteristic light has inspired painters for generations. The works of Dutch artists from the so-called “Hague School” (late 19th Century, early 20th Century), such as Weissenbruch and Mauve, are good examples of this. “Dutch Light” also inspired the Dutch painter Mondrian. In his compositions of dunes he combined light with the search for abstraction. One of the biggest compliments I could receive came when this abstract series was purchased by a collector who was born and raised on the Dutch island Texel. He recognized the unique Dutch colors and light in these works.

What you also might notice is that there are no people to be seen in Beach XX. They are of course present indirectly, suggested by the structures of the beach-huts. The beach is still, with no movement taking place. Actually, this scene was also conceived by zooming in, this time on a painting from 1996, Beach IV (see picture below) where there is activity to be seen. 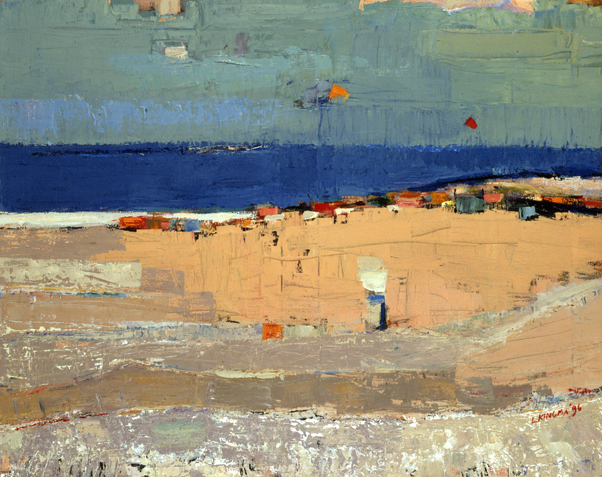 This beach has a warm and lively character. The color of the sand is warm, and you can tell by the colorful kites tumbling in the turquoise-greenish sky and the white stripe of the surf in the deep blue sea that it is a hot summer afternoon, and the breeze is strong. There is also the suggestion of people walking on the beach.

This 1996 painting is based on an early gouache painting (see picture above) that I made on location on the beach on the Dutch island of Schiermonnikoog. It was a hot Sunday afternoon in July 1983. In this painting you can feel the strong hot breeze sandblasting you, and the intensity of the sun. There is a great deal of lively activity: kites in the air, a volleyball net, colorful wind screens, white surf and sand……lots of sand. It blew on my paper while I was painting and stuck to it while the paint was quickly drying. It added to the character.

The beach series as well as the abstract series have slowly become a substantial part of my oeuvre. In this blog post I have taken you on a tour back to the source of it all, showing that it can sometimes take years for a series to mature and to make the steps that lead from observation to abstraction. You can see how an initial experience and feeling from a scene can migrate through different stages, leading to an abstract series. This also gives you insight in a process that I sometimes use to generate new ideas and series, by starting with a figurative, realistic painting and using it to evolve toward an abstract work or series. It is a fascinating journey from figurative to abstract. 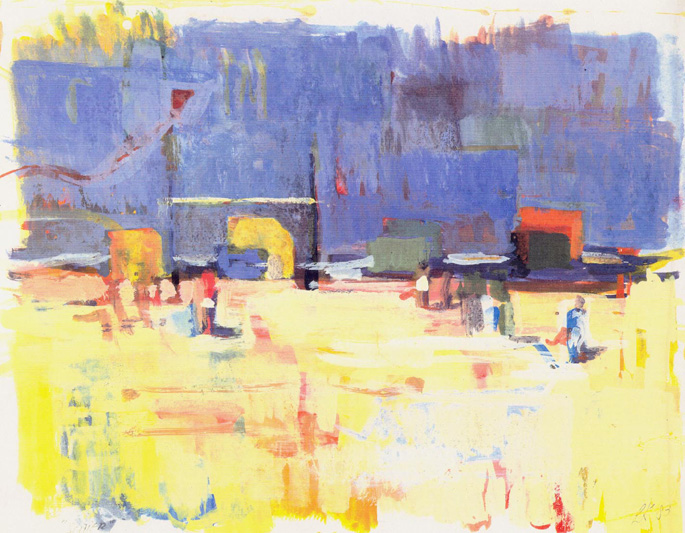